Written by LearnAppMaking on August 3 2020 in App Development, iOS 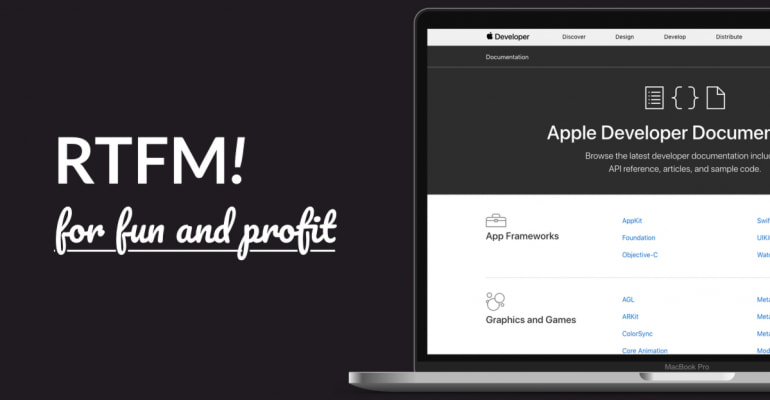 Did you know Apple has a ton of helpful articles, documentation and resources for app developers? And it’s not just only about Swift – they have guides about app marketing, design and business.

You might already know some docs, like the official Apple Developer Documentation about Swift, iOS SDKs and Xcode. Other documentation is a bit more hidden, like Apple’s own iOS app design templates and device mockups.

In this tutorial I’ll guide you through using these resources effectively. I’ll show you where to find them, how to read them, and how you can apply the information in your own app development projects.

The Apple Developer Documentation is by far the most comprehensive and extensive resource about iOS development. It has thousands of pages that explain the different frameworks, components, classes and functions of the iOS SDKs.

You’ll find both overviews, that explain topics and concepts, and API references, that show you how classes and functions of these SDKs work. Most of them also include sample code and example projects.

You can reach most documentation via developer.apple.com, and you won’t need a Developer Account to access them.

What’s the difference between an API and an SDK? An API is the code you talk to, so functions and properties. An SDK is the “package” that code is housed in. You can compare an SDK with a car engine, and an API with the steering wheel and gas pedal.

Let’s take a look at the docs for UIKit. UIKit is the framework you use to build graphical user interfaces (GUIs) for iOS apps. When we take a look at its overview page, we learn that UIKit “provides the window and view architecture for your UIs, event handling for Multitouch, and the main run loop needed to manage interactions among the user, the system, and your app.” 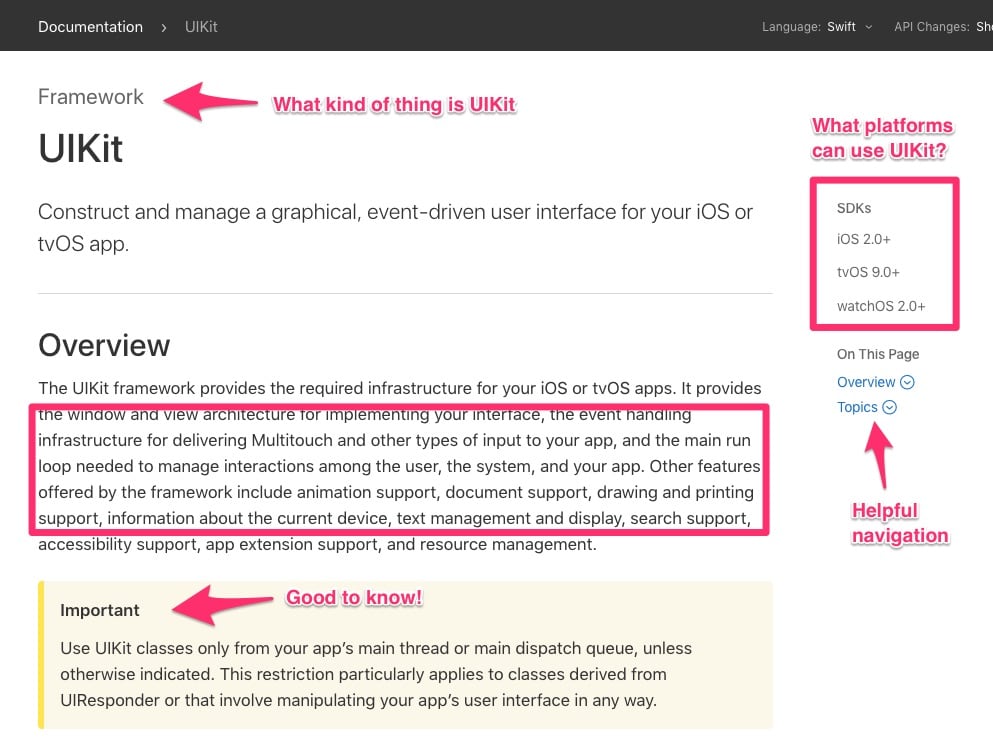 On the page we see a bunch of helpful stuff:

When we go deeper, we can get to a page like Views and Controls. Articles like these make the Apple Developer Documentation so helpful. Instead of just listing classes and functions, it has visual explanations on components like views.

When you’re just starting out with iOS development, simple explanations like the ones below can make a big difference. 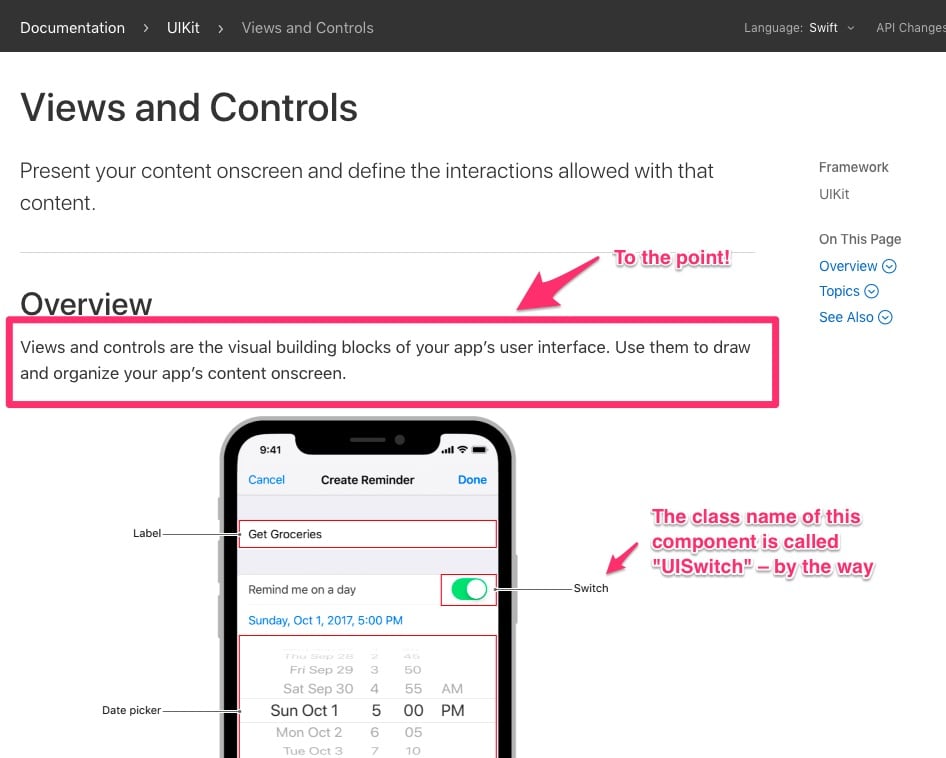 The major iOS frameworks like UIKit are surprisingly consistent. See those views in the above screenshot? Their class names are UILabel, UIDatePicker and UISwitch. The “UI” part is a prefix, and it comes from “UIKit”. Likewise, you’ll find an SKProduct class in StoreKit (“SK”) and a CGColor in Core Graphics (“CK”).

Fun fact: The “NS” prefix used for Objective-C classes comes from “NeXTSTEP”, the software built by NeXT, the company Steve Jobs founded after being fired by Apple in 1985. NeXTSTEP found its way into iOS after Apple acquired NeXT, a step that also lead to the return of Jobs to Apple.

If you’re coding iOS apps, and you’ve never read this page… READ IT NOW! There’s a lot of good stuff in there, and its fundamental knowledge you need to have.

The Swift Language Guide is also part of the Apple Developer Documentation. It’s super helpful for understanding Swift features and syntax, although it can be a bit overwhelming for beginners.

Developer Docs on Classes and Functions

If you’re a bit like me, you also use Google to find the most basic things about iOS development. Whenever you Google a Swift class name, like SKProduct or UISwitch you’ll often find an Apple Developer Documentation page as the first search result. 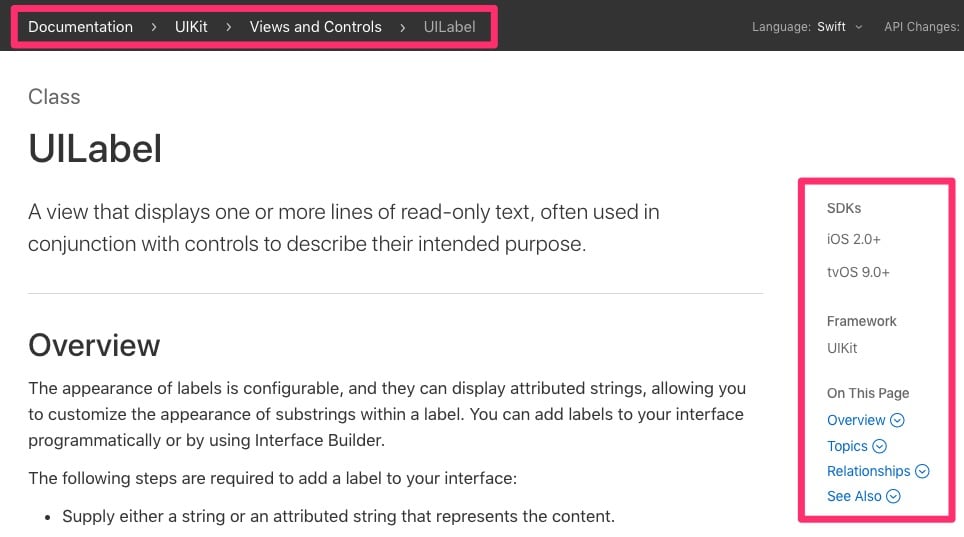 Again, the documentation is very helpful in explaining what a UILabel exactly is.

When we scroll down or use the on-page navigation, we can read a whole lot about the use of labels. What properties and attributes does it have? How do you change its text color? How can we internationalise its text? 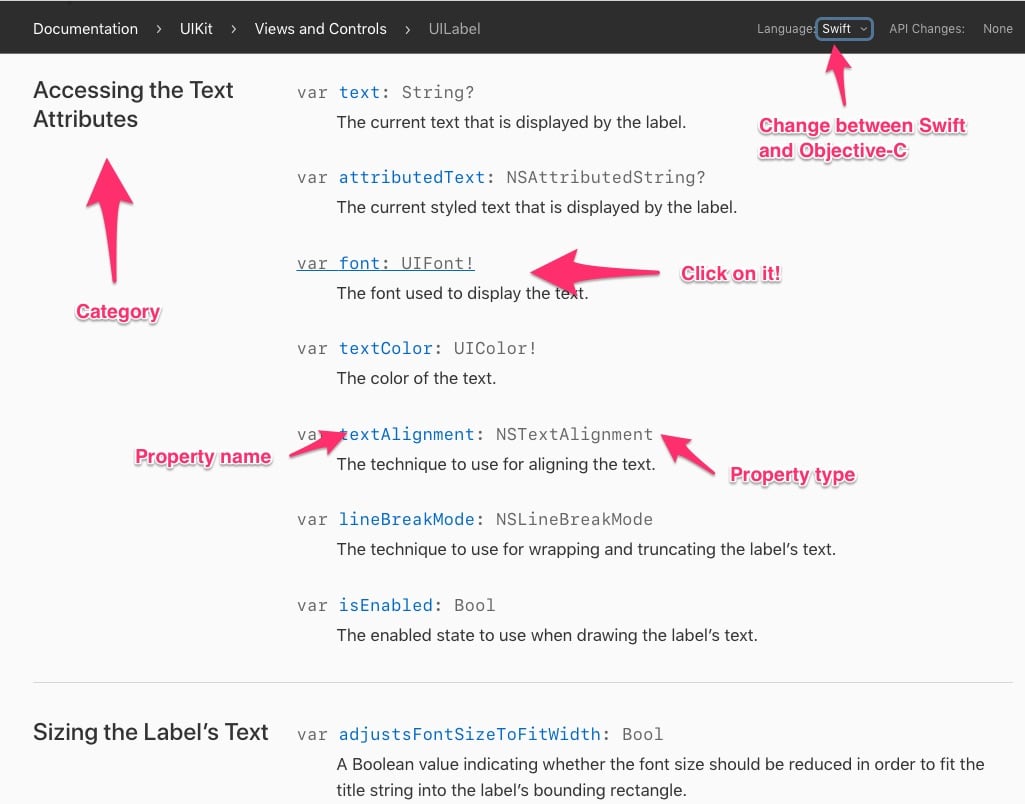 At this part of the page we read that text is the property I can use to change the text on a label, font for its font, and textColor for the text color. These are obvious of course, but it’s still faster to look them up in the documentation than it is to Google for “how to change label text color.”

Then, when we click on the text property of a UILabel, we get to this page: 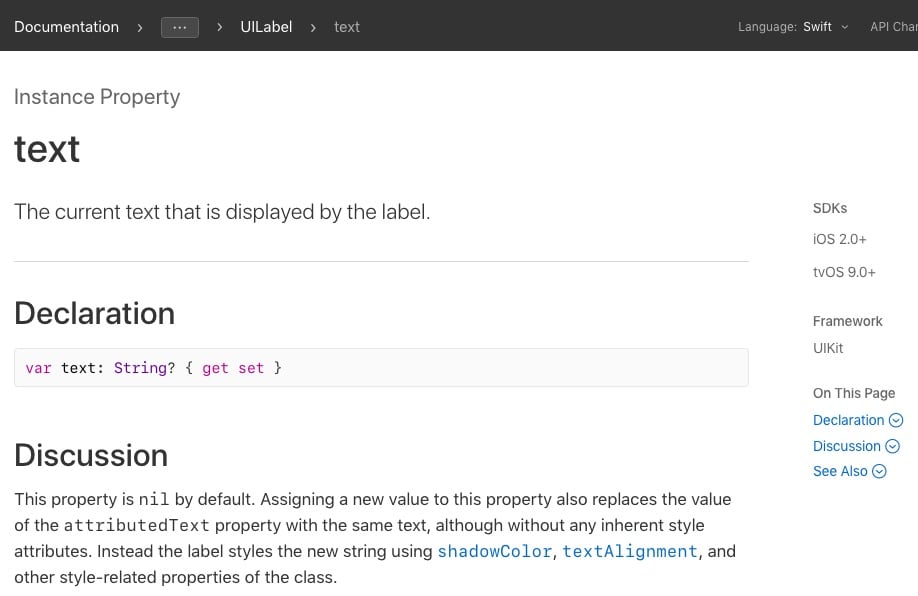 These detail pages are especially helpful when you’re figuring out how a property or function works. For instance, we can learn:

When you scroll down, you can also see a bunch of related documentation. The guides are particularly helpful, such as About Text Handling in iOS. Are you starting to get a sense of how huge the documentation really is?

Going back to the class overview page, there’s a few more things that stand out:

Deprecation means that a class, function or property (“API”) has been marked for removal in a future version. The function still works right now, but if you use it you risk that it won’t work in the future. It’s always recommended to upgrade your code when you see a deprecation notice.

Most developers think that the Human Interface Guidelines are design rules that your app needs to follow.

But that’s not the case, because they’re guidelines. And they’re pretty good at guiding you through best practices for UI/UX design of iOS apps!

Take the Interface Essentials, for instance. They categorise user interface components as either being Bars, Views and Controls.

These components are used uniformly throughout iOS frameworks, so you can rely on standardised UI and interaction. Moreover, when you’re confused about how to design a particular feature in your app, you can use the guidelines as a basis.

The Human Interface Guidelines contains a lot more information, and it’s especially helpful to see what the default way of designing iOS apps is.

If you haven’t checked it out before, make sure you do – there’s a lot in here that helps your understanding of iOS development and design. If you think that a developer doesn’t concern herself with design, think again! Building apps is as much about writing code, as it is about creating great UI/UX.

A few key resources are:

And last but not least, check out the Design Resources. You can download Photoshop and Sketch files with graphics templates for every Apple platform, and you can download device mockups – images of iPhones – to use in your marketing.

Apple’s developer resources don’t just focus on design and development. Marketing is a big part of building apps too!

You’ll find resources about app marketing, App Store and app business on the Apple Developer portal. With $86 billion paid out to developers, it’s no surprise that Apple wants to help you generate revenue in the App Store.

Compared to the Apple Developer Documentation, the pages about the App Store look a lot like they’re trying to sell you something. Full-page images, stylised screenshots and snappy text – it doesn’t exactly look like a library, right?

It’s because the resources are aimed at app marketers, as opposed to programmers. Don’t let it fool you – as an indie developer, and even as a programmer, it pays dividends to dig into these App Store marketing resources.

Here’s what I find helpful and interesting:

An often overlooked piece of documentation is iTunes Developer Help. You’ll need to log in with your Apple Developer Program account ($99/yr) to read it. It has helpful pages about iTunes Connect, and also explains how paid apps, In-App Purchases, App Analytics and App Store promotions work.

So… now you know! You don’t need to Google every iOS development question all the time. You have a huge library of information at your fingertips – so dig in.

One last thing… I often use a Mac app called Dash to quickly look up iOS classes and functions. It supports offline mode, integrates with Xcode, and it can even search StackOverflow for questions about a particular topic. A must-have!