The Basics of App Store Optimization

Written by LearnAppMaking on July 29 2020 in App Marketing 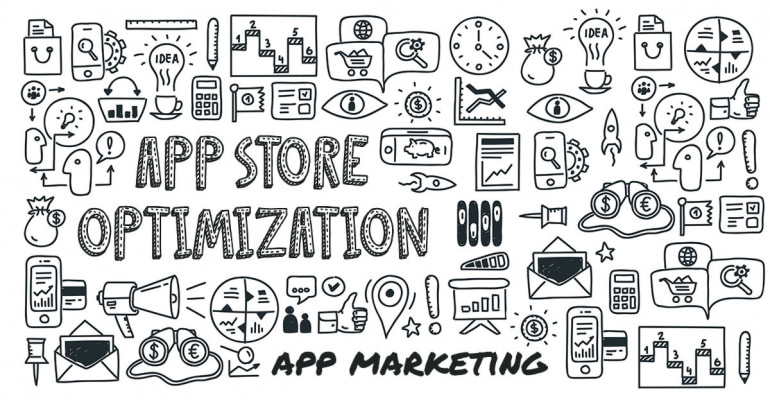 App Store Optimization (ASO) are the tactics you can use to “rank” your app higher in the App Store. Ranking governs which apps are listed as the Top 25 and Top 100 in the App Store. An app’s ranking greatly influences how many people install it, which is why you use ASO to get more app installs.

You’ve just made your first iPhone app and published it into the App Store. Great! But… your app installs aren’t going through the roof. Now what?

In this tutorial you’re going to take a look at the 3 most fundamental factors for App Store Optimization and app page marketing: your app’s title, screenshots and keywords. The goal is to get the basics right, so you can then focus on improving your rankings.

What is App Store Optimization?

App Store Optimization is the process of improving the visibility of an app in the App Store, with the goal of ranking higher in search results and Top rankings. A higher ranking means that more users download and install the app.

App Store Optimization isn’t the only thing that matters in App Marketing. A common misconception among app developers is thinking that, once you’ve built an app, you can get tens of thousands of installs with App Store Optimization alone. This is far from true. Many aspects of ideation, validation, design, development, marketing and business operations influence an app’s success.

App Store Optimization means that you’re making an effort to expose your app to a bigger number of potential users, and increase your chances of acquiring those users. If you don’t have any users to start with, there’s not much to optimize. If you’ve made poor decisions in design and development, App Store Optimization can’t save you.

As a beginner app marketer, focus your efforts on:

Perfect is the enemy of good. The worst thing you can do is focus too much on optimizing, when you haven’t yet created something that is getting traction in the first place.

When you’re ready to do App Store Optimization, what are the most important factors?

The aspects of your App Store Optimization efforts that determine your app’s ranking are:

If you had to pick any three, then these are the most important:

Your app’s icon is the wildcard here. Looking through the App Store, you’ll see app icons everywhere. The app is the icon, and vice versa. If you can convey clearly who your app is for by using your app’s icon, you’re one stem closer to effectively marketing your app. When in doubt, ask yourself: “What does this app icon remind me of?”

Several tools can track these factors and determine their influence on an apps ranking. Popular tools are:

Apple has its own App Analytics platform, and it is the only tool that can measure inbound visits to your App Store app page.

If you don’t include any tracking in your app, App Analytics can still give you a decent insight into app engagement and conversion rates. Reporting on inbound traffic on your App Store page is very valuable, because it can tell you where potential users come from before they install your app.

Now that you know what factors to pay attention to, let’s continue to the first one: your app’s title, and keywords.

What’s in a name? The title of an app is a “hook” that people use to identify your app. The name is not the brand, but it’s part of your brand.

Finding a good app title is an art on its own. In general, an app name – as seen from an ASO perspective – should address two things:

The name of an app, together with its icon, is often the first trigger for a user to check it out in the App Store. When browsing the top lists, a user only sees an app’s icon, title and category. When searching (i.e. using the search function) a user sees the app icon, title, rating, the name of the publisher and 2 screenshots. 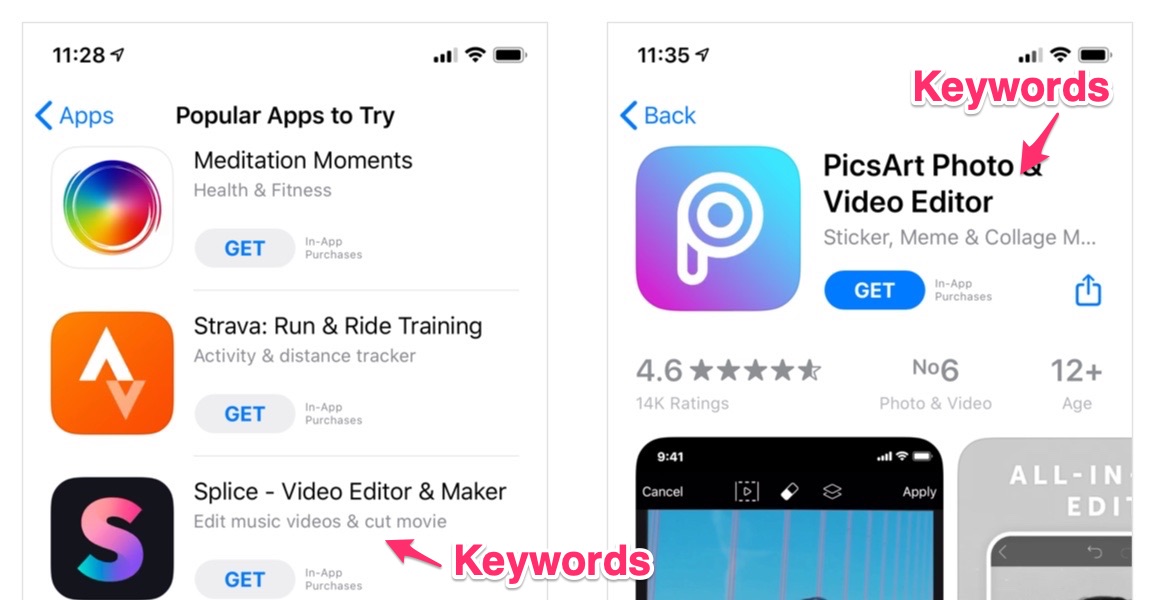 In the above screenshot, you can tell that these apps are going to show up for search phrases like “run tracker”, “movie maker” and “meme editor” — even though none of those keyword combinations are explicitly provided.

The best app name is a name that a potential user searches for, and your app shows up as the top result. Think of typing “shoes.com” into your web browser, but then for apps. Can your app own that space?

The best keywords are words that a user uses to describe your app, in their own words. This is important! You may think of your Sleep Meditation app as a “sleep” app, whereas users could prefer to use the word “meditation” or “going to sleep”. With a good App Store Optimization tool, you can tap into those keyword ideas and find more of them.

Ask yourself: “When a user searches for my product, what kind of keywords would they use?” It’s often not enough to come up with a search term you think is relevant. You need to test what kind of words your target audience associates your service with.

A good way of researching that is using a keyword tool, like Google Keyword Planner or App Radar. These tools return search results based on keyword ideas you put in. Such search queries are used by real-world users, which makes it a good representation of how a potential customer searches for your product. On top of that, many research tools can give you an indication of search volume: How many users search for those keywords?

When you’ve established both the app’s brand name and its keywords, put the two together. Keep in mind that Apple sometimes rejects apps that include a slogan or catchphrase. You can only include keywords in the title when they’re relevant for the app, or explain the app title in a more complete way than just the brand name.

A screenshot is typically an image of the UI of several in-app screens, which isn’t optimal. See, when a user sees your app in the App Store, they’re asking 3 questions:

When one question results in a negative decision, i.e. “This app isn’t for me”, the next questions aren’t asked. That’s why it’s so important to have a solid app title. The question “What’s this app for?” is answered by the title of your app, and by the keywords inside the title.

The screenshots of your app help the user answer these questions. A user will try to understand the user interface design of your app, and ascertain whether or not your app can be used to get to the goal they have in mind.

Merely using screenshots of your User Interfaces won’t help the user discover why they should use their app. A UI only conveys so much; what’s the real benefit of using an app?

Fortunately, there’s a solution. Instead of showing literal UI screenshots, create images that include the UI and also put one or 2 lines of sales copy on top. 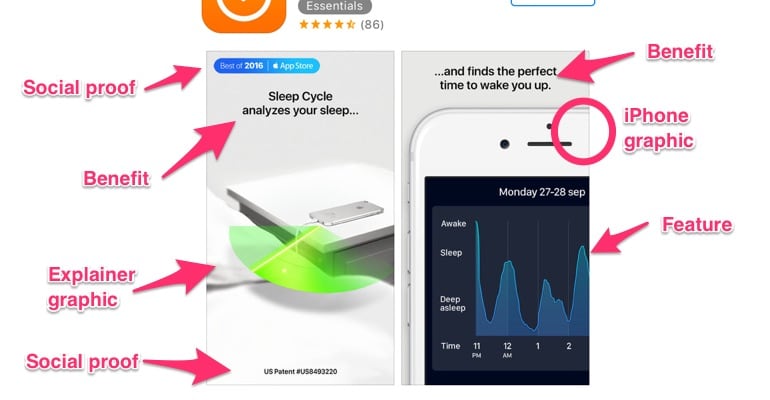 Note the clever use of the three dots, in the caption, that “forces” your eyes to the second screenshot to finish the sentence.

You’ve seen this before: an image that shows an iPhone with the app’s UI, and above that it tells you something about the app itself. Including key benefits as text inside an app screenshot allows you to explain your app and sell it’s UI at the same time.

When deciding on what text to put on top of the app screenshot, keep the following heuristics in mind:

You can include a video, too. It’s shown alongside the app screenshots. Viideos are a great way to portray the functionality of your app, and build trust with the user. In your video, include the key benefits of your app and use a voice-over to explain them. Again, don’t distract the user with too much graphics and keep it short.

Graphic design is an art and industry on its own, but within the realms of App Store Optimization, take note of the following app icon heuristics:

If you have trouble designing an app icon, consider these resources:

Don’t forget that your app’s icon also represents the app on the user’s Home Screen. You’ll want something that stands out there, too. Pick an icon and an app name that captures your app’s function, and helps the user recognize what this app is for.

App Store Optimization helps users discover your app in the App Store. We’ve discussed the basics of ASO in this tutorial. A quick recap:

Getting Started With App Marketing