Home » Blog » App Development » How To Design Your App’s Database

How To Design Your App’s Database 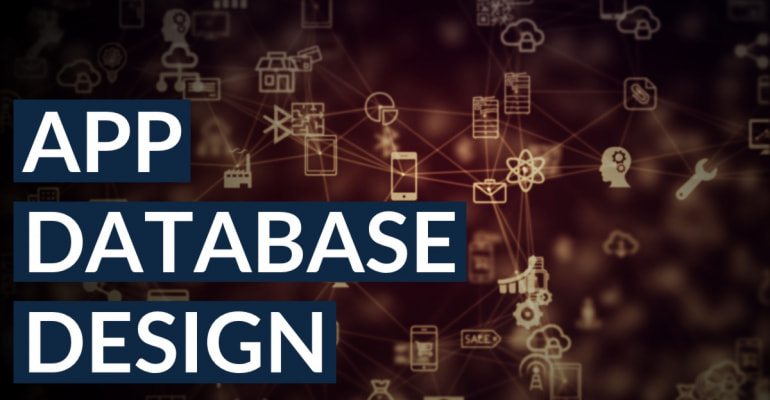 How do you design your app database in Swift? Every iOS app has a database these days, whether it’s locally or in the cloud.

Tools like Realm and Firebase take care of database setup and management, but how do you design the data that goes into the database?

In this article I’ll walk you through the process of app database design. We look at database tools, how to structure your data, and how to create relationships.

When it comes to designing a database for your app, you can choose from 3 types of databases:

Firebase’s Realtime Database fits in between a document-based database and a graph database. You can traverse the JSON-like database structure from any point in a path, and get the JSON document from that point in the graph. Realtime Database does not support advanced SQL-like queries, but it’s incredibly fast and scalable.

Learning how to work with databases? If you’re new to databases, I recommend you start with learning good old plain SQL. This puts you close to the core principles of most database platforms and tools, such as queries, filtering with WHERE, and joins. You can find more sage advice about working with databases here.

When you’re designing your database, simply start by looking through its mockups or UI designs. Every single user interface or app screen typically corresponds to a data object. Which types of data do you see? Start there.

In a social media app we probably have a timeline. The timeline shows posts from users, so that’s how we know we need a Post object. Users need to identify themselves, for logging in, and to organise posts. Now we know we need a User object. (More about likes, later.)

Once you know the types of objects you want to save in your app’s database, you can define the properties they have. The objects and properties together make up the so-called schema of your app database.

You’re most likely already familiar with the concept of “properties” – they are no different from Swift classes and Object-Oriented Programming.

In the example above, we’ve defined a text property of type String and an image property of type URL. See how it’s just an ordinary Swift class with properties? Relational database objects are no different.

We’ll get to the user and likes properties next…

As an experiment, see if you can visualise the objects in a database as spreadsheet rows and their properties as spreadsheet columns. What if you “translate” your app database objects to a spreadsheet format? It’s a great way to kickstart your database design.

In almost any app, database objects interact with each other. Posts are liked, users create posts, and comments are added to a post. When you design your app database these interactions are defined as relationships between objects.

There are 3 types of relationships:

Most relationships you define in your apps will be one-to-many. Let’s look at an example.

By making these two one-to-many relationships, both users know who they are following and who follows them! You could say that a follower relationship is directional, i.e. when I follow you, that doesn’t mean you’re also following me back.

However, when you think of befriending someone it is different: when we’re friends, I am your friend, and you are my friend. This implies a many-to-many relationship.

Exciting, isn’t it? Make sure to keep the difference between one-to-many and many-to-many in mind, as it will save you a lot of headache in the future.

Most database tools define their own implementations of relationships, but the principles remain the same. In the example above we’ve used Swift arrays. Realm, for instance, uses the same format. Parse Server uses a so-called pointer. MySQL and SQL-like tools often use a simple unique ID or identifier key to reference connected objects.

And that’s all there is to it! Good luck designing your app’s database. To summarize, when you design your app database, this is what you do: