The Magical 10x Developer – How?

Written by LearnAppMaking on February 15 2019 in Dev Careers 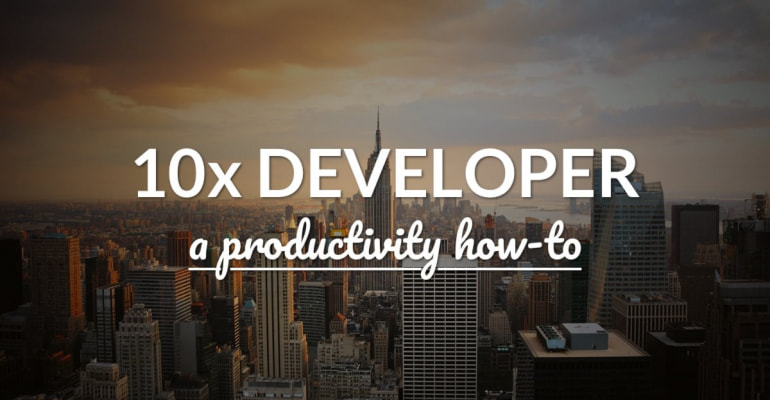 The elusive 10x developer produces ten times as much output as a decent 1x developer. Who are these rare, mythical, magical 10x developers? Can you become one too – and how?

In this tutorial, we’ll unravel the mysteries of the 10x developer. As it turns out, there’s nothing magical about it. We’ll discuss productivity, focus, deep work, and smartcuts you can use to increase your hourly output.

Think about the concept of a lever. A lever amplifies any input force to provide a greater output force. You can lift an elephant with your index finger, provided the lever is long and light enough.

So, what’s a software developer’s best leverage? As you’ll learn in this tutorial, they are:

Every one of these principles uses a lever to do more, with less. You don’t have 10 times as much hours in the day, so the increased output as to come from somewhere else – your leverage.

Focus: Do One Thing

The 10x developer’s weapon of choice is focus.

As a kid, you surely tried to burn stuff in the backyard with a convex glass lens. Such a lens converges rays of light on one point. If the light is bright enough, you can easily set a bit of tinder on fire (or worse).

Productive focus works the same way. It’s not about intently staring at one thing, or forcing yourself to “stay focused”, or being forceful and controlling in your way of working.

In fact, like most of these things, focus is paradoxical. As it turns out, it’s much easier to focus on the task at hand when you’re calm, quiet and non-controlling. It’s about letting go, instead of holding on.

As you learn later on in this tutorial, focus and flow are two sides of the same coin. Most developers, including 10x-ers, typically describe some kind of mental state in which they experience “flow”. This flow is often brought about by initial focused effort.

If you find it hard to focus, and if you feel that focus often escapes you, try the following exercise:

What you’re experiencing is focus. It’s a calm, restful, quiet kind of attention. You’re not stressing or straining, commanding your mind to focus, or trying to shut things out.

You can’t focus for long periods of time, so that’s why you’re looking away after a few seconds. You will find though that it gets easier to focus if you practice.

Once you get the knack of the feeling focus gives, it becomes easier to let focus arise in your mind. In a focused state, it’s easier to get your work done more effectively. And that’s the hallmark of a 10x developer.

If focus is a bit too vague for you, then let’s talk about prioritization.

The concept is simple:

A 10x developer knows which tasks produce a desired end result. They can focus on the tasks that are important, and let go of tasks that aren’t. This is the same kind of less-is-more leverage that we talked about earlier.

Want to get better at prioritization?

The reason you’re aggressively discarding unimportant tasks, is because it gives you space to focus on the tasks that do matter. It also helps you keep your to-do list short.

You’re postponing tasks of medium importance, because it’s easy to get lost in these tasks. You can’t discard them, but they aren’t moving you forward much either. By postponing them, you can assess their priority again next week.

Moreover, some tasks just magically disappear if you ignore them, and other tasks underscore their importance by becoming more urgent.

Some tasks simply can’t or shouldn’t be discarded or postponed. You need to eat, sleep, pay bills and clean your desk. But what about urgent phone calls, things your boss needs you to do, or obligations you can’t cancel?

It’s important to be ruthless here. If it isn’t helping you move forward, it’s holding you back, because these tasks steal time and effort away from the tasks that do matter.

What a 10x developer does here, is finding the usefulness of a task that doesn’t appear important at first. Find ways for these tasks to help you reach your goals.

That urgent phone call, is it an opportunity to help someone else? That thing your boss asks you to do, is it a way to show what you’re good at? That obligation, could it give you an opportunity you didn’t see before?

If an urgent-but-unimportant task really doesn’t help you, consider whether the negative consequences are that bad if you don’t complete the task. What’s the worst that could happen? What’s the best that can happen if you do something important instead?

Why Do You Need Productivity?

If you type “productivity definition” in Google, you get this as a result:

They contradict each other, right? The first focuses on effectiveness, the second on efficiency.

Here’s how they are different:

When talking about productivity, we often mistake efficiency and effectiveness. It doesn’t matter if you complete a task efficiently, if it’s the wrong task to begin with. The 10x developer leverages this distinction.

It’s like a car that’s stuck in sand. You rev the engine, the wheels spin, but there’s no traction so you stay stuck. What you need is leverage, something for the wheels to get a grip on. Then, the engine power gets hold, and you’re out of the sand.

Why do you need to be productive? It’s so you can reach your goals. It’s about going where you want to go. So, before you can work on increasing your productivity, you have to find out what your goals are. As a 10x developer, where do you want to go?

Without a goal, it’s difficult to score!

How much time did you spend today on the following things?

We all do this and that’s okay.

What’s not okay, however, is that all these distractions keep you from the work you set out to do. You already know this, though. You know you shouldn’t check Facebook, put your phone to sleep, and only check your email 2-3 times a day.

So, what’s not working here?

It’s not that you don’t have self-control. You do! If anything, the reason for compulsively checking email and Facebook is that you have too much self-control.

By creating all these rules for being productive, being a digital monk, trying to retain control, you’ve created so much friction and resistance. Constantly resisting and giving in costs a lot of energy and effort. Ultimately, it eats away your focus and calm.

The answer lies in focus and flow. In his book Deep Work, author Cal Newport describes a state of mind that’s called flow. 10x developers are intimately acquainted with flow.

When you’re in flow, code you write appears effortlessly on your computer’s screen. You’re zoned out, sometimes for hours on end, emerged in a soothing, blissful and productive state.

The problem is – there’s no step-by-step guide for achieving flow. Here’s what helps, though:

What’s most important, is to clear away any distractions. It’s impossible to get into a flow state if you’re constantly interrupted by notifications, emails and people walking into your office.

Some ideas about not getting distracted:

With a little bit of practice, you can work deeply for 1-5 hours like this and get a lot of work done. Being able to work focused and undistracted is of paramount importance to become a 10x developer.

Can you automate some of your work with the help of scripts, apps and tools? That’s what we’ll discuss next. It’s exciting, because automation typically comes naturally to 10x developers!

You can’t outsource software development work to a computer, but you can automate a lot of other things.

As with anything, eliminate before you automate – otherwise you’re automating tasks that shouldn’t be executed in the first place.

Don’t know what you can or should automate? Keep track of all tasks you do in a given 1-2 week period. For every task, consider if it can be automated, or eliminated, or made more efficient with some tool.

Don’t be afraid to go low-tech. Ironically, many apps don’t make us more productive! You don’t have to use a fancy to-do list app, if pen and paper suffices. You could even quit Twitter and Facebook, if you want to.

Another way to work more productively, especially during repeat tasks, is batching. The concept is simple:

This example is a bit contrived of course, but you can see how it applies to answering email, filing papers, fixing bugs, and any task that involves a series of repeatable steps.

The biggest advantage of batching is that it reduces overhead. You only have to set up each step once. This also reduces downtime from switching tasks, because you only have to switch to a new task once.

Think about it. If you were a pastry chef, would you make every pastry one by one, or would you do all bottoms, all creams and all tops in batches?

The 10x developer doesn’t do the work of a 1x developer 10 times as fast. As it turns out, 10x developers aren’t magical: they just get more results by doing less.

Their leverage can be found in:

Awesome! Want to learn more? Check out these resources: